Dialogue writing on first day of school in Sanskrit

This dialogue writing post can be referenced by school students and Sanskrit learners. 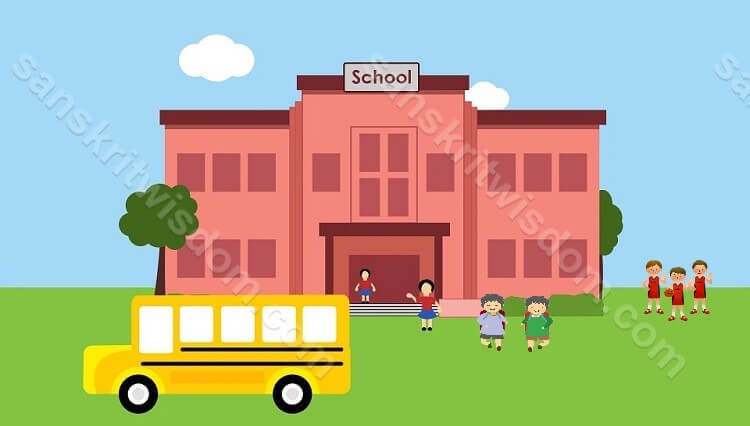 This post contains 10 plus lines of picture description on classroom in Sanskrit with transliteration, translation in English and Hindi which one can read to learn and write basic Sanskrit sentences.

This post contains school items names in Sanskrit with transliteration, translation in English and Hindi which one can read to learn and increase ones Sanskrit vocabulary.

Essay on My School in Sanskrit

This post contains Essay on My School in Sanskrit with transliteration, translation in English and Hindi which one can read to learn and increase ones Sanskrit sentence formation and composition skills.

Dialogue writing on the first day of school

It is Keshav’s first day at school. He is talking to Shripad. Shripad has been studying in this school since first grade.

Both enter the school. Shripad shows the school laboratories to Keshav.

Both of them go to the library.

Keshav: The library is very big. Which types of books are there?
Shripad: There are various kinds of books. Along with novels, there are books for study too.

Shripad: Now it is time for the class to begin. Let’s go to class.

Both of them go to class and start studying happily.