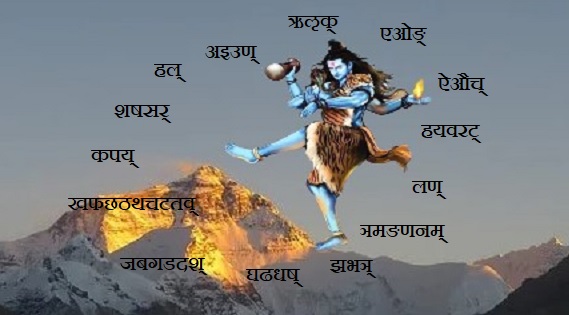 Till some time back, very few people took interest in understanding and learning languages like Sanskrit. However, nowadays there is renewed interest in learning Sanskrit all around the world.

This interest stems from various topics like Yoga, Ayurveda, Ancient Science, Spiritual texts and Literature among other things. People have translated many Sanskrit texts into their own languages, which has helped tremendously. However, There are many who want to understand and learn from the source, which brings them to learn Sanskrit.

Sanskrit grammar is very methodical and has pre-defined rules. Once a person unterstands these rules, it becomes easy to read and undestand sanskrit. We have tried to put content on Sanskrit grammar which is to the point and easy to understand.

Maheshwari Sutrani is the first chapter in this series. This chapter explains the origins of the Sanskrit Alphabet i.e. the foundation of Sanskrit Grammar as we understand it today.

Learning this chapter will help you:

Who is the chapter for?

The Māheśvarī-Sūtrāṇi also commonly known as the Maheshwara Sutras or Shiva Sutras or Maheshwari Sutras are fourteen sounds which contain all the letters of the Sanskrit alphabet.

Lord Shiva, when he performed the cosmic dance called Tandav Nritya for the sages, fourteen sounds (Maheshwari Sutras) were heard from his Damaru (musical instrument), which came to be known as the Śivasūtrajālam.

Sage Panini by the grace of Lord Maheshwara i.e. Shiva composed the work on Sanskrit grammar in a book called the Ashtadhyayi.

Maheshwara Sutras (Māheśvarī-Sūtrāṇi), also known as the Shiva Sutras are considered to be the foundation of Sanskrit. Sanskrit Varnamala has been created from the Maheshwari Sutras.

The above content is derived from the following verse:

अष्टाध्यायी (aṣṭādhyāyī) is considered to be one of the best works of sage Pāṇini. It is one of the oldest Sanskrit grammar text which has survived till date in its totality, which is – complete and not diluted.

The word Aṣṭādhyāyī means eight chapters, which is a combination of the two words ‘अष्ट’ meaning ‘eight’ and ‘अध्यायः’ meaning chapter. The eight chapters are further divided into four sections each called the padas. These eight chapters have a total of 3,959 sutras.

The below given table contains the Maheshwari Sutras.