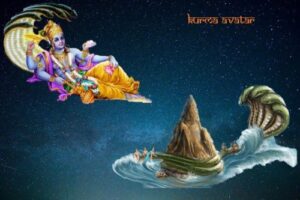 Kurma Avatar is the second incarnation of Bhagwan Vishnu. He took the form of a Tortoise to defeat the forces of evil. This happened in the First Yuga of the four, the Satya Yuga.

The arrogance Indra – king of Gods

One day Rishi Durvasa was walking by when he saw an apsara (Celestial Dancer) with a beautiful flower garland with extraordinary fragrance.

He told her that he was going to give it as a gift to Indra (God of Lightning and Thunder), King of Heaven, and Devas. The Apsara happily gave it to the Rishi as she was an apsara in Indra’s court.

When Rishi Durvasa met Indra, Indra was on his Vahana (Mount), the Four-Tusked, Seven-Trunked White King of Elephants called Airavata.

Rishi Durvasa presented the garland to Indra, which he accepted and jokingly said “Perhaps Airavata would like it” and put the garland on one of its trunks.

However, Airavata did not like the smell of the garland and shook itself in order to remove the garland from its trunk. This resulted in the garland falling on the ground and getting trampled under Airavata’s feet.

Seeing this behavior of Indra, Rishi Durvasa who was a short-tempered sage got angry and cursed Indra and all the other Devas (Gods).

He said, “Neither you nor your elephant can appreciate the good things in life, so as a punishment, I curse you and all the other gods to lose your powers and fortune for eternity.

Slowly, Indra and the other gods began to lose all their battles against the demons who were now led by Bali, the Asura (demon) king. In a short span of time, Bali along with his army took control of Heaven.

Having lost their battles and Heaven, Indra along with the other Devas went to Bhagwan Vishnu for help.

Churning of the Ocean of Milk – Samudra Manthan

On hearing from Indra and the other gods on what had transpired. Bhagwan Vishnu said, “Rishi Durvasa’s curse can be altered and the Devas could get their powers back by drinking Amruta (the nectar of immortality)”.

Amruta was not something that could easily be found or had. They would have to churn the ocean of milk to get it.

However, the Devas realizing that they no longer had their strength again asked Bhagwan Vishnu for help. He suggested that they take the help of their enemies, the Asuras, for churning the ocean of milk.

Indra was not happy with the suggestion and said: “if the Asuras also get Amruta, they will become immortal, and we would not be able to defeat them ever”.

Vishnu promised the Devas that he would not let Amruta fall into the hands of the Asuras.
After the assurance from Vishnu, the Devas formed an alliance with the Asura King Bali. They decided to churn the ocean of milk together to get the nectar of immortality and divide it amongst themselves.

The Asuras had accepted the proposal as they also wanted to become immortal.
To achieve this near-impossible task, the Devas and Asuras decided to use the Mountain known as Mandara as a churning rod and serpent king Vasuki as the churning rope.

The Asuras insisted on holding the serpent’s head during the churning process. The Devas also wanted to do the same, however, on Bhagwan Vishnu’s advice agreed to hold its tail.

As soon as the churning started, Mount Mandara began to sink. There was no support to hold it steady and keep it afloat. At that moment, Bhagwan Vishnu took the form of a Tortoise, his second Avatar (Kurma) to support Mount Mandara on his back (Shell).

When the churning restarted, poisonous fumes emitted from Vasuki’s mouth and poisoned the Asuras. However, the Asuras along with the Devas continued and a lot of things started to come out from this ocean of milk.

One of the first things that came out was a poisonous drink known as Halahala. It was so hazardous that it could destroy all living beings.

To save themselves, the Devas and Asuras went to Bhagwan Shiv (One of the Holy Trinity Gods) for help. Shiv took the poison and drank it. He made the poison drink stop in his throat, due to which his throat became blue.

After this incident, Shiva also came to be known as Neelakantha, God with the blue throat.
The churning continued and fourteen Ratnas (Treasures) came out. These were divided between the Asuras and Devas.

A few of the prominent treasures amongst the fourteen Ratnas were;
• Lakshmi – Goddess of Wealth. She became the eternal consort of Bhagwan Vishnu.
• Kamadhenu – Wish granting cow, Brahma gave her to the Rishis.
• Uchaihshravas – Seven headed snow-white horse was given to Bali.
• Moon – Shiva adorned it on his head.

The Devas again requested Bhagwan Vishnu. He took the form of Mohini (an Apsara) and distracted the Asuras. She then took the Amruta from Garuda and started distributing it amongst the Devas, who drank it.

An Asura named Rahuketu came to know of Mohini’s plan and disguised himself as a Deva and started to drink some of the Amruta.

Before the nectar could pass RahuKetu’s throat, she cut off his head using the weapon called Sudarshana Chakra (a sharp spinning disk), splitting Rahuketu’s body into two parts. As Rahuketu had Amruta, he did not die. His head came to be called as Rahu and his body Ketu.

In Vedic astronomy, the place where the head (Rahu) and the body (Ketu) fell after RahuKetu’s head was severed by Mohini, are denoted as the points of intersection of the paths of the Sun and the Moon.

After this, the Devas regained their powers completely and became immortal. In this way, Bhagwan Vishnu helped the Deva’s in regaining their lost power and glory. First by taking the Kurma Avatar and later as Mohini.