Learn about the Story of Buddha, the prince who left everything for enlightenment. What made Siddhartha Gautama to become the Buddha. 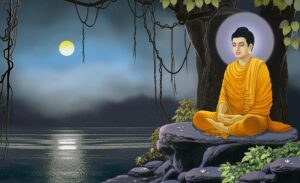 The History / Story of Buddha

When humans have faced hardships and were in dire situations which affected their existence, Bhagwan Vishnu has incarnated to release humans from their misery. One such incarnation is that of Bhagwan Buddha who is the 9th Avatar. This avatar incarnated in the Kali Yuga after the Krishna avatar.

Buddha was born to Raja (King) Shuddhodana and Rani (Queen) Mahamaya in a place called Lumbini which is located in present day Nepal. He was named Siddhartha Gautama.

However, sadly, Rani Mahamaya died seven days after giving birth to Siddhartha. After this, the onus of Siddhartha’s upbringing lay on Raja Shuddhodana shoulders. Raja Shuddhodana was very sad that Gautama will have to grow up without his mother’s love and affection.

Gautama was kept confined to the boundaries of the palace in Kapilavastu and not allowed to interact with many people.

When Siddhartha grew up to become a handsome young man, Raja Shuddhodana decided to get him married. Gautama was married to a beautiful princesses named Yashodhara. They had a child named Rahul. Both of them loved Rahul very much. Siddhartha was living the life of riches and was oblivious to the world around him.

After a few years had passed, he decided to venture outside his palace. One day, he asked one of the charioteers to take him outside the palace. The charioteer could not say no and took him on a tour of the city.

After travelling some distance, Siddhartha saw a feeble old man sitting. He asked the charioteer why this man is like this? The charioteer explained that everyone one day will become like this. All this was new to Siddhartha. He decided to pursue his trips more frequently.

The next time he went on his trip, he saw a diseased person lying on the roadside. He again asked the charioteer what is wrong with this man? The charioteer explained that the man is suffering from a disease which cannot be cured and will die very soon. Siddhartha was sad to hear that. He had now started to think about all the new things that he was now observing.

These observations made Siddhartha to find out more about life. In another of his trips he saw a dead body being taken for cremation. Again, like always, he asked the charioteer. Where are these people going? The charioteer explained that the person being carried away is dead and is being taken to the crematorium.

Siddhartha was very sad. He started introspecting about life. He was finding it very difficult to live the life of a prince.

One day during his visit outside the city he saw a sage meditating. This increases his curiosity and makes him speak to this sage about what he was doing. After his conversation with this sage, Siddhartha is convinced about the path he needs to take.

After a lot of contemplating, he decided to leave the comforts of life and seek the true meaning of life. He left his home saying goodbye to his wife, son and father in the middle of the night.

How Siddhartha Gautama became the Buddha

After leaving his home, he started meditating, moving from one forest to another. He finds teachers who teach him the correct meditation technique. After years of meditation, he sits under the Peepal tree to mediate with the intent of attaining self-realization. He ultimately attains enlightenment under this Peepal Tree which came to be known as the Bodhi Tree. This is situated in the Indian state of Bihar in the city called Bodh Gaya.

After Siddhartha Gautama attained enlightenment people started calling him the Buddha i.e. The one who has attained awakening. Hence the name Gautama Buddha.

He continued travelling and teaching people what he had learned through meditation and his enlightenment. In today’s world, these teachings are consolidated in what we call Buddhism. A large number of people are followers of Buddhism.

This is the history of Siddhartha Gautama becoming the Buddha. Hope you liked reading it. Please do share your comments.