Learn about the story of the birth of Ganapati, the wise and courageous son of Bhagwan Shiv and goddess Parvati. He is also known as the destroyer of all obstacles. 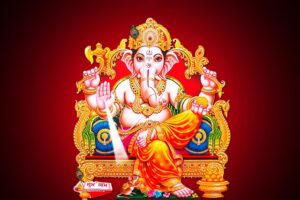 The History / Story of Ganapati

Ganapati or Ganesha is worshipped by followers of Sanatan Dharma a.k.a. Hinduism and is known to remove obstacles of his devotees. He is the God of wisdom and has been blessed by Bhagwan Shiv to be worshipped first whenever any ritual or puja is performed.

His mount is the Mushak (a Mouse). His Parents are Bhagwan Shiv and goddess Parvati. Riddhi and Siddhi are his consorts and Kartikeya is his brother.

The story of the birth of Bhagwan Ganesha is very interesting. One day, Bhagwan Shiv was away from Kailash and Goddesses Parvati was planning to have a bath. However, she did not want anyone to enter the house when she was bathing. Accordingly, she instructed the Shiv ganas (soldiers) to stand guard in front of the house and not let anyone enter.

While the ganas were deep in thought contemplating their actions, Bhagwan Shiv entered his abode. He saw that Goddess Parvati was not to be seen and started searching for her. When he found her, Goddess Parvati’s bath got disturbed.

Goddess Parvati was not happy with the Ganas. She was very angry with them. After some time, she asked the ganas why they allowed Bhagwan Shiv to enter when she had specifically instructed not to allow anyone to enter. They did not have an answer.

After this incident, Goddess Parvati concluded that the ganas could not be trusted. She then decided to create a son of her own.

One day, when Bhagwan Shiv was not home, she built a clay statue of a handsome boy and breathed life into the statue. She also gave him, all the powers that she had. She was very happy with her son and asked him to stand guard while she bathed and not allow anyone inside the house.

When Bhagwan Shiv returned, he saw this boy standing in front of the house. While thinking about who this boy was, he started walking towards the main entrance. As soon as Bhagwan Shiv reached the door and was near the boy, the boy stopped him and said “Who are You? Where are you going? You cannot enter”. My mother has asked me to not allow anyone inside.

On hearing this, Bhagwan Shiv started laughing and said “Boy, you don’t know me. I am Shiv, and this house belongs to me and my wife”. The boy was not deterred. He simply replied “My mother has not told me anything about you. She has asked me not to allow anyone inside and that is how it is going to be”.

Bhagwan Shiv was now getting annoyed. He asked his ganas to make the boy go away. The ganas told the boy to let Bhagwan Shiv in. However, he did not listen.

The ganas then fought with the boy. However, they were defeated. No one from Bhagwan Shiv’s army could defeat the boy as he had all the powers of Goddess Parvati.

Bhagwan Shiv was now becoming impatient and asked the boy one last time. This time also the boy did not listen. Bhagwan shiv then lifted his Trishul (Trident) and hurled it towards the boy. The Trishul severed the boy’s head and the body lay lifeless on the ground.

By this time, Goddess Parvati had finished bathing and came out hearing the commotion. She was shocked and angry to see that her son was lying on the ground lifeless, and the ganas were rejoicing. Enraged, she asked “Who did this? Who has killed my son?”. On hearing this Bhagwan Shiv was surprised and asked Parvati “What are you saying. How come this boy is our son?”

Goddess Parvati then narrated the incident of how the ganas did not obey her order to not let anyone inside the house and how she had created her son out of clay.

On hearing this, Bhagwan Shiv was sad. Unknowingly he had killed their son. He said, “Parvati, It was I who killed the boy. He was not allowing me to come inside our house. I did not know that he was our son. I will bring him back to life”.

Bhagwan Shiv then asked his ganas to travel north and bring the head of the first animal that they came across. The ganas trekked north and saw an elephant. They killed this elephant to get its head.

However, to their surprise, a celestial being came out of the Elephant’s body. This celestial being thanked the ganas for freeing him. Before leaving for his heavenly abode, he told the ganas that he was trapped inside the elephant due to a curse and was grateful that he is now free.

The boy woke up and stood in a fighting pose facing Bhagwan Shiv. On seeing her son alive, Goddess Parvati took him in her arms and explained to him all that had happened and introduced his father Bhagwan shiv to him.

On hearing what his mother, Goddess Parvati had told him, the boy was happy to see his father and embraced him. Bhagwan Shiv also reciprocated. Looking at the boy’s courageous effort to fight for his mother, Bhagwan Shiv decided to make the boy the leader of the ganas and gave him the name Ganapati or Ganesha.

This is the history of Bhagwan Ganesha’s birth. Hope you liked reading it. Please do share your comments.