Learn about Matsya Avatar, the first incarnation of Bhagwan Vishnu and how he saved the Vedas from a Demon. Also learn about King Manu and the great deluge. 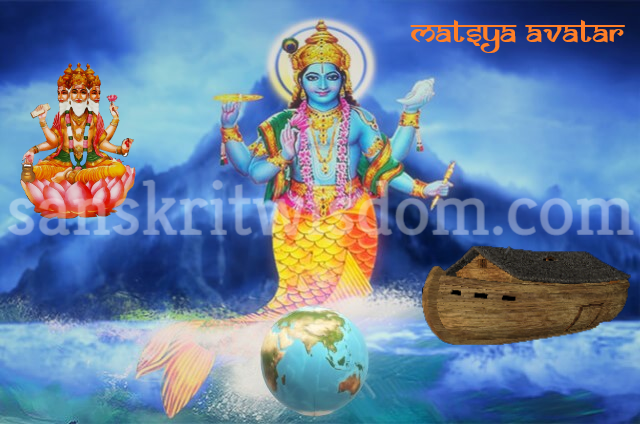 Matsya is the first of 10 incarnations (Avatars) of Bhagwan Vishnu mentioned in the Sanatan Dharma religious scriptures.

This story is about saving Vedas (Scriptures of Eternal Knowledge) from a Demon by Bhagwan Vishnu through his first incarnation as the Matsya Avatar. It also shows the role played by Manu (a king) during Satya Yuga in saving all life forms on Earth from the great deluge and floods thereafter.

Per the ancient (Sanatan Dharma) Hindu scriptures, this story took place in the Yuga (Era) called the Satya Yuga (First Yuga of the four Yuga’s).

The second Yuga is the Treta Yuga, third is the Dvapara Yuga, and last Yuga i.e. the fourth Yuga is Kali Yuga. We are currently in the Kali Yuga

When the Satya Yuga was nearing its end and all was soon to be destroyed in order to pave way for the next Yuga i.e. the Treta Yuga.

After the creation of a Yuga, Bhagwan Brahma was sleeping. During this time, a demon decided to take away the Vedas to understand all the sacred knowledge and become better than the gods.

After stealing the Vedas, the demon hid in the depths of the ocean so that no one could find him.

When Bhagwan Brahma woke up and came to know about the disappearance of the Vedas, he asked Bhagwan Vishnu for its protection.

To secure the Vedas from the demon, Bhagwan Vishnu incarnated in the form of a fish i.e. the Matsya Avatar.

Manu and the Fish

During this period of the Satya Yuga, there was a respected king named Manu, who ruled his kingdom with full sincerity.

He was a great devotee of Bhagwan Vishnu and used to go to the banks of river Krithamala every day for his morning rituals and prayers. This river was a majestic river flowing in his kingdom.

One day, while near the banks of the river, he closed his eyes and started chanting the mantras that he would chant regularly. He joined his palms and took water in them to raise them above his head as an offering to Bhagwan Vishnu. This was a custom he regularly followed to start his morning prayers.

As King Manu was about to pour the collected water back into the river, he noticed a little fish in his palms and heard the fish asking him to save it from the bigger fish.

King Manu looked around and saw a lot of large fish swimming around him. Seeing this, he obliged and put the small fish in the vessel that he was carrying called the Kamandalu (oblong water pot).

King Manu felt that it was his duty to save the fish. He completed his morning prayers and went back to his palace with the fish in his Kamandalu.

On reaching his palace, King Manu put the little fish in a small container filled with water which was bigger than the Kamandalu he was carrying.

Next morning, Manu went to check on the fish. To his surprise, he saw that the little fish had grown and was too big to fit in the small container.

He immediately asked his assistants to get a bigger container and put the now bigger fish in it. This kept happening every day; the fish would keep outgrowing the container.

Manu one day decided to transfer it to a pond nearby, then he moved it to a lake, then to a river, then to the sea and then Manu finally put it in the ocean.

The fish grew so big that even the ocean could not hold it. By then, Manu had understood, that the fish could be no one else but Bhagwan Vishnu.

Bhagwan Vishnu in the form of Matsya appeared in front of King Manu and informed him that even though he was following Dharma (Cosmic law underlying right behaviour and social order) by fulfilling the little fish’s needs, he did not understand that the fish’s need was to live in a container. However, Manu gave it more space than needed.

Bhagwan Vishnu told Manu that a great flood (Pralaya) was coming that would wipe out all living beings and submerge Earth.

To save life on earth, Bhagwan Vishnu instructed King Manu to build a ship, collect seeds of all plants, pair of all animals, Vasuki (the snake god) and the seven sacred sages (Saptarishis) along with their family and make them board the ship when the flood came. King Manu did as Bhagwan Vishnu had instructed.

Then, Matsya grew a horn on its head and pushed the ship onto the ocean with the help of Vasuki the snake god towards the Himalayas.

When the flood waters receded, Matsya found out where the demon king was hiding in the ocean. Bhagwan Vishnu then fought the demon, killed him and secured the Vedas.

The Vedas were returned to Bhagwan Brahma. King Manu along with the Saptarishis (Seven Rishis) together repopulated Earth. Soon the Earth looked and became the way it was before the great deluge.

References to the great deluge can also be found in texts of other major religions of the world e.g. Noah’s Ark story in the Hebrew Book of Genesis.