Learn about the story of Rama, prince of Ayodhya, seventh incarnation of Bhagwan Vishnu. He is popularly known as Maryada Purushottam, the upholder of Dharma (right way of living). 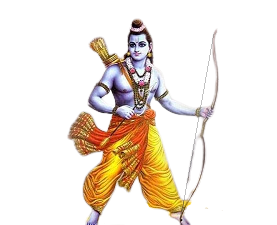 Lord Rama is the seventh Avatar of Lord Vishnu. He was born on Earth in the form of a Human. The Yuga (Age) in which this took place, was the Treta Yuga – second of the four Yugas.

In Treta Yuga, there was a king named Dasharatha – descendant of the Raghuvansha dynasty who ruled Ayodhya, the capital of Kosala Kingdom. Ayodhya was situated on the banks of Sarayu River.

Dasharatha ruled his kingdom well and was respected by all. He had three queens, Kausalya, Kaikeyi and Sumitra. However, Dasharatha and his queens were very sad as they had no children.

Sage Vashishtha, the royal priest of Ayodhya tells King Dasharatha that he should perform the Putrakameshti Yagna for the queens to have a son.

On hearing this, Dasharatha performs the Yagna with the help of Rishi Shringa Muni who was an expert in performing this Yagna.

After the Yagna was successfully completed, Agni Dev emerges from the fire holding a golden bowl. He tells Dasharatha that the golden bowl contains a special type of payasam (potion), which his wife’s should savor, after which they will bear children.

Dasharatha accepts the divine dish gladly and gives two equal parts of the payasam to his wives, Kausalya and Kaikeyi.

Birth of lord Rama and Gurukul

After nine months of the queens savoring the payasam, Dasharatha becomes a proud and happy father to four sons.

Kausalya gives birth to Rama the eldest, Kaikeyi to Bharata and Sumitra to the twins Lakshmana and Shatrughna as she had savored half of the payasam.

When the four young princes are old enough to start their education, king Dasharatha calls the royal priest sage Vashishtha and asks for their Upanayanam (Thread ceremony) to be done, so that they can go to sage Vashishtha’s Gurukul for studying the art of warfare, Politics, Religion and importantly Dharma among other things.

As time passes by, the four sons grow up to become strong and handsome teenagers.

After completing their education, all the four brothers return to Ayodhya.

Marriage of Rama and Sita

One day, Bramharishi sage Vishwamitra comes to Kings Dasharatha’s palace and asks him to share two warriors who could fight the demons. He says, he wants them to fight and kill the demons that are creating disturbances during his Yagnas.

Dasharatha thought that his sons, Rama and Lakshmana were old and good enough to take care of sage Vishwamitra’s problem, so he sends them with the sage.

Both Rama and Lakshmana defeat the demons and help sage Vishwamitra with his Yagnas.

When Rama and Lakshmana go to take sage Vishwamitra’s leave, he asks both of them to accompany him to Mithila the Kingdom ruled by king Janak.

To Rama’s surprise there is a swayamvar (practice of choosing a husband, from among a list of suitable Kings and Prince’s) for princess Sita.

For Sita to choose a suitable life partner, king Janak had kept a task that the gathered kings and princes had to complete. They had to lift the bow of Lord Shiva called Pinaka and tie the string to it.

This Bow of Shiva was no ordinary bow. It was given to king Janak by lord Parashurama, the sixth incarnation of Lord Vishnu.

Most of the gathered kings and princes could not lift it or tie the string after lifting it. When there was no one who could complete the task, sage Vishwamitra asks Rama to participate in the swayamvar.

Lord Rama obliges, lifts the bow and in the process of tying the string breaks it. King Janak is happy that the price of Ayodhya could complete the task.

As soon as Rama breaks the Pinaka, Lord Parashurama appears in king Janak’s court. He was very angry that Pinaka is broken. He demands to know who broke it and how it was broken.

Parashurama gives his blessings for Rama and Sita’s marriage and goes back to his abode.

King Janak calls King Dasharatha and his family along with all well respected people o Ayodhya for Rama and Sita’s marriage. It is also decided that Sita’s sisters would be married to Rama’s brothers.

A grand wedding takes place where all the four sons of King Dasharatha get married to the four daughters of king Janak.

Many years had passed by and king Dasharatha was now becoming old. He decided to crown Rama the king of Ayodhya.

Hearing this, Kaikeyi was happy, but her evil maid made her think that it was bad for her, as her son Bharata would not become the King.

Kaikeyi on the suggestion of her maid convinced Bharata to go out of the kingdom for some work and asked Dasharatha for the fulfillment of the two boons she had got from him when she had saved his life during battle long time back.

She asked for Rama’s exile and her son Bharata to be made king. Dasharatha could not say no due to the boons that he had given her.

Rama was an obedient son and went into exile as asked for by his step mother with his wife and brother Lakshmana.

One day Surpanakha, Ravana’s sister was roaming the forests where Rama, Sita and Lakshmana were living.

She chances upon Rama and Lakshmana and is captivated by them. She disguises as a beautiful maiden and approaches them to marry her.

Both of them politely decline her offer. She gets offended and starts abusing both of them. Lakshmana gets angry and cuts off her nose.

On being humiliated, she goes back to Lanka and instigates Ravana to take revenge for her humiliation. She also praises Sita’s beauty for Ravana to be mesmerized.

Per the plan, Maricha, an accomplice of Ravana disguises himself as a golden deer and goes near Rama and Sita’s hut. Sita is fascinated when she sees the deer and asks Rama to seize it.

As Sita wants the deer badly, Rama runs after the deer to catch it, however, it runs into the forest.

After sometime, Sita hears Rama’s call for help, which was Ravana’s accomplice calling out in Rama’s voice.

Hearing this, Sita asks Lakshmana to help Rama. Lakshmana immediately draws a protective line around their hut to protect Sita and asks her not to step out of the line. He then goes to help Rama.

As Sita is waiting for Rama and Lakshmana to return, Ravana comes in disguise as a sage and tricks Sita to come out of the protective line. As soon as Sita comes out, he immediately returns to his true form and abducts her. He takes her away to Lanka in his Pushpak Vimana (Flying Craft).

Meanwhile, in the forest, the golden deer is killed by Rama. At this time Rama realizes that the dead deer is Maricha the demon.

Sensing trouble, he runs back towards the hut. Along the way he meets Lakshmana and learns about Sita asking Lakshmana to help him.

When they return, to their dismay, they find Sita missing.

They start searching for her and come across Jatayu the Vulture king who is badly injured. Rama enquires about who did this to him. Jatayu starts narrating what had happened.

While resting I heard a woman cry for help. Looking around, I could see that a woman is forcibly being carried away in a Vimana. When I flew near the Vimana to rescue her, I could see that the woman being abducted was Sita.

Immediately, I crossed the Vimana’s path and started to fight Ravana. I injured Ravana and tried my level best to rescue Sita, but could not rescue her as Ravana clipped my wings and I fell to the ground.

I was holding my breath to meet you so that I could tell you about what happened.

Jatayu then tells Rama that he saw the Pushpak Vimana flying towards the south and breathes his last.

Rama then performs the last rites of Jatayu and starts walking towards the south.

While moving towards the south, when Rama and Lakshmana are trying to figure out the way to find where Ravana has taken Sita, they meet Hanuman who tells them that Sugriva and his army can help in finding where Sita is. However, his brother Bali has exiled him.

Hanuman then takes Rama and Lakshmana to meet Sugriva. Sugriva narrates how he was defeated by Bali. Rama tells Sugriva, that he will help him kill Bali. Sugriva calls out to Bali for a fight during which Rama kills Bali and makes Sugriva the king of kishkinda.

After Sugriva became king, he creates a search party and sends them in all four directions.

The one which goes south has Hanuman, Jambuvant, Angad and many others. They reach the sea shore where they meet Sampati, brother of Jatayu. He tells them that Ravana has taken Sita to Lanka.

Hanuman and the others try to brainstorm on finding a solution to cross the sea. It is then that Jambavant tells Hanuman that he has the power to not only cross the sea but also many other special powers.

He tells Hanuman that the sages made you forget your powers when you were young as you used to play a lot of mischief and disturb their Yagnas. They also had told that when the time comes for doing a good deed if someone made you remember, your powers will come back. Now is the time for you to use your powers.

Hanuman using his powers reaches Lanka and meets Sita. Having found Sita, Hanuman sets Lanka on fire when Ravana directs his soldiers to set his tail on fire.

The search party then reaches Kishkinda and narrates what all had happened. Rama along with Lakshmana and the Vaanar (monkey) army set out to rescue Sita.

Vibhishana, Ravana’s brother tries to convince him that the right thing to do is to let Sita go. However, Ravana kicks Vibhishana out of Lanka.

Vibhishana then joins Rama in his quest to rescue Sita.

There is a fierce and long battle between both the armies. A lot of warriors like kumbhakarna and Ahi Ravana – Ravana’s brothers, Indrajeet, Ravana’s son and many others die.

In the end, Rama fights with Ravana and kills him emerging victorious. Rama thanks all who helped him win against Ravana and leaves for Ayodhya as his 14 years exile had by this time come to an end. Rama, Sita, Lakshmana and Hanuman reach Ayodhya after which Rama is made King.

Lord Rama, the seventh incarnation of Vishnu is the main protagonist of the Sanatan Dharma a.k.a. Hinduism epic Ramayana. Rama is considered to be an ideal person i.e. Purushottam, the upholder of Dharma (right way of living).

Lord Rama was born on the ninth day of lunar month Chaitra, which is celebrated across India and the world by followers of Sanatan Dharma as Rama Navami.