Essay on Eagle in Sanskrit

This is an essay on Eagle in Sanskrit. 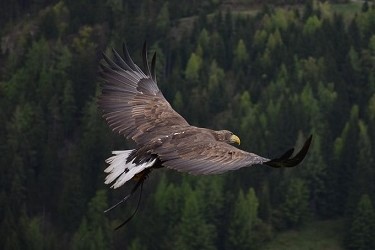 Garuda is a very powerful and mighty bird. He is the vehicle of Shri Vishnu.

Garuda is a massive bird. He has two great wings. His beak is also very beautiful. He is a very majestic bird. Garuda is the greatest bird. So he is also called the King of all birds. So ‘Khageshwara’ is another name of his.

Garuda’s father is Kashyapa Rishi and his mother is Vinata. Tales about the enmity between Garuda and the snakes have been given in the ancient stories. Garuda and Vinata were the slaves of the mother of the snakes, Kadru. Garuda and Shrivishnu first met when Kadru had ordered Garuda to bring the nectar of immortality, Amrita.

Garuda is the enemy of all snakes. He sometimes eats them. That is why ‘Naganashaka’, ‘Nagantaka’ and ‘Ahiripu’ are some of his other names.

Garuda is considered to be equal to a god in India. Although he is not a major god, Garuda holds respect in the minds of all Indians. The Gayatri Mantra of Garuda is also there. It is said to destroy all negativity. Following is that holy mantra –

We meditate on Garuda, the great soul, the manifestation of the Supreme Being. May the one with golden wings give me clarity. O Garuda, please guide me towards enlightenment.