Essay on Shri Rama in Sanskrit

This is an essay on Shri Rama in Sanskrit, i.e. निबन्धः.

This Essay on Shri Rama in Sanskrit can be referenced by school students and Sanskrit learners. 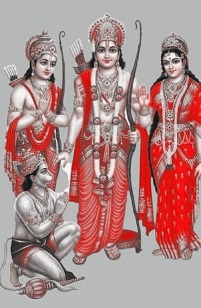 He is the son of Queen Kausalya and King Dasharatha. He had three brothers. They were Bharata, Lakshamana and Shatrughna. Shri Ram resided in Ayodhya. Sita was his wife. Lava and Kusha were the sons of Shri Ram. Shri Ram is the Maryada Purushottam, he who follows the rules. Calmness was the speciality of Shri Ram. He followed the “Ekapatnivrata”, i.e. having one wife. People refer to him as an ideal in all walks of life. Some of his other names include Sitapati, Raghava, Raghunandana, etc.

To follow the orders of his father, he accepted exile to the forest. There were many important incidents in his life, like – Valivadha, building a bridge across the sea to Lanka, Ravanavadha, etc. After returning from exile, Shri Rama was crowned as king. Shri Hanuman is his greatest devotee.

Shri Ram is admired by all. Shri Ram is one of the most beloved deities of all Indians.