Essay on Shri Krishna in Sanskrit

Essay on Shri Krishna in Sanskrit. 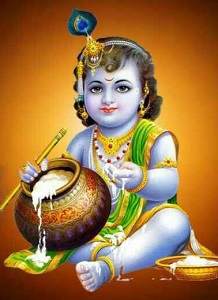 He used to live in Vrindavan when he was a child. Mother Yashoda took care of him. He liked eating butter. He slayed many demons even in his infancy and childhood.

During the war of the Mahabharata, Shri Krishna became Arjuna’s charioteer. He imparted the knowledge of the Bhagavad Gita at that time. He was a great administrator, destroyer of the wicked and the protector of the good.

Shri Krishna is my favourite deity. Om, Salutations to the son of Vasudev (Shri Krishna)