Essay on Elephant in Sanskrit

This is an essay on Elephant in Sanskrit. 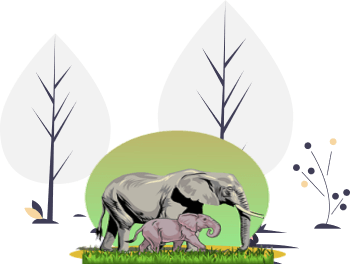 The elephant is my favourite animal. It is one of the biggest of all animals.

It is a very useful animal. It is very useful for humans. The elephant is dear to Lord Indra. This animal is a herbivore. The elephant eats branches of trees, crops, etc. Elephants live in herds in the jungle.

It has two long tusks. The tusks are precious. Artisans create beautiful ivory artefacts from the tusks of an elephant. It has a long trunk. Its four legs look like pillars. Its ears are very big like winnowers. It has a a small tail. It has small eyes. This animal is also used for carrying heavy loads. In ancient times, the kings used to keep elephants in front of their palaces. The elephants were also used for wars.

The elephant is considered a symbol of prosperity.